Well internet, we've got a new game almost finished and ready for you perusal. Keep an eye on the website over the next few days! I'm not going to tell you anything about it now, you'll have to come back and see for yourself ;-)

Instead I want to give out a general update on some exciting new developments. So BONG! Here is the news!

We have a new team member:

Take a bow Adam Tustian! Adam is Richard’s bro and also a kick ass composer / sound engineer. Like most of the rest of us he has no prior games experience but he’s been messing around writing tunes in Reason & Cubase for years. Expect kick ass beats in all our games from now on!

It also means that team Caper is now complete, between the 4 of us I believe that we’ve got all the skills required to make a game covered.

I’m really excited about this – next Saturday we’re going to hold a game jam! For those who don’t know: a game jam is where you hole up somewhere and try to make an entire game from start to finish in one bash. We’re going to start from nothing and go through the whole process of coming up with an idea, and then designing, building and launching the game in a single day. The plan is that we start at midday and don’t stop until the finished game hit’s the website.

I think it’ll be a great experience for us, and we’ll learn a lot about working together as a team. Also it means you guys get another game to play, Merry Christmas!

Here's something Richard knocked up this week.  No idea if we'll use these guys for anything but it showcases a new art style that Rich has been working on... looks rather nice I think! 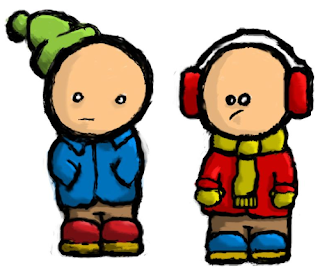 That’s all for now folks, remember to keep half an eye on the website and enjoy your mince pies :-)
Posted by Colonel Ratticus at 15:12 No comments: