I’ve finally found a bit of time to get my shit together and finish a game!

This one’s the biggest we’ve attempted so far. If you’ve played any of our earlier games then hopefully you’ll notice a step up in quality.

This was the first time we played around with things such as animations, AI, cut scenes etc.  so we’ve added a few new strings to our bow. It may not be very big or ambitious but we’re moving in the right direction… We’ve still got our training wheels on at the moment :-)

Posted by Colonel Ratticus at 14:03 No comments:

Well internet, yet again I have to write a grovelling post apologising for being late!

I promised a game for you before Christmas and also we were going to hold a game jam and make yet another game and it’s now 2013 and neither of those things has happened… which technically makes me twice the liar. So what happened?

Firstly there’s the Connect 4 game I’ve been working on since October: I did genuinely have it completely finished about a month ago.  Then, just before launch, I decided to get my missus to play test it...  She beat the AI 8-0 without breaking a sweat :-|

Watching that happen made me realise something:  in the single player game, difficulty is everything!

The AI I had written was pretty simplistic and didn’t offer much of a challenge.  As a result of that she found it boring as hell despite the fact that she was winning.

So therefore, all the time I’d poured in to animations, sound & music, etc. was wasted, I mean: who gives a shit if a boring game is presented well – it’s still boring…

Since then I’ve completely gutted the AI and rebuilt it from scratch, I made it lot cleverer (in the rematch my wife couldn’t beat it once)… then realised that I’d hit the same problem from the other end (i.e. I have to let you guys win sometimes!) So now I’m concentrating on making it more dynamic.  In the end I’m hoping it’ll be dynamic so that it changes and gets harder to beat as the matches progress.

Well we did indeed hold the jam and it was awesome. We spent a day locked up at Rich & Ads house working on a new project from scratch.  As well as consuming large quantities of beer and pizza we put together a rough design, art assets, a sound track and a from-scratch game engine in a single session!

So where’s the game?  Well we didn’t get enough done before ran out of time.  After much discussion we decided that we’d be better waiting until it’s coherent and playable rather than just releasing something half baked.

The objective of the jam was always more about being a good learning experience anyway, so as far as I’m concerned I think it was a huge success!

I’ll leave you with proof of the above in the form of some pictures of the crew hard at work :-)

Adam getting his mac on: 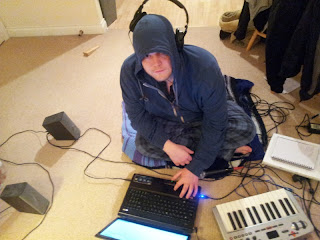 Mungy being all artistic n' shit 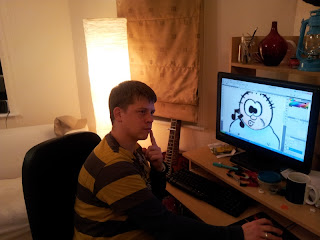 Posted by Colonel Ratticus at 15:52 No comments: