Hi Fives all round!

At last dear internet, we’ve got something new to show you!

It seems like ages since we’ve released anything new:  I’ve hated having to write dev update after dev update banging on about how swimmingly it’s all going without being able to show you guys anything tangible to back it up...  Well it turns out that we weren’t slacking after all!

Here’s what we’ve been up to… 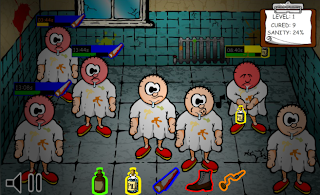 Yes we’ve talked about it before – but now you can go play it!

Well what are you waiting for? Head over to http://www.caper-republic.net/PlayGame.aspx?Game=bedlam right now and give it a bash… go on, I’ll wait…

Back so soon? Ok well let me talk about it a bit then.

Students of this blog will of course be aware that we’ve already talked about this game quite a bit during its’ development, so I won’t go over anything that’s been previously announced. Instead I want to talk a bit about the latest developments.

In the last few weeks the game’s really come together.  First off Mungy’s completely redone all the backgrounds and a lot of the other assets.  I think the new art style looks awesome and is a real step up from the previous versions, so well done there munginold!

Also we’ve completely reworked the score system and how infected patients react when they’re not cured.  These mechanics feel a lot more solid than the previous arbitrary lives system that we had in place.  It also fits in with the overall plan for the game now as you lose a grip on the game you also become infected and lose your mind!

The final big late addition was sound.  Mostly we begged it from around the internet but unsurprisingly there aren’t any sound libraries out there which cover effects for quaintly insane Victorian mental patients! Therefore we grabbed up some beers and recorded them ourselves.  This was of course hilarious – it’s hard to gurgle and shout the word Bedlam over and over again with a straight face!  We eventually got through it though – judge the results for yourselves in the game!

Go have a look: We have a kick ass new design and a bunch of extra content for you guys to enjoy!

Well there you go, welcome to the new home of Caper! Why don’t you settle in, create an account and join our community?  Right now you’ll be able to play our games, log high scores and join in the discussions on the forum. In future we’re going to add a bunch of extra features to it like being able to brag to your mates when you beat their score, detailed gameplay stats and a bunch of other cool stuff.

So why not join up now and buckle up for an awesome ride!

Well there are still a few things we need to tidy up with both the game and the site first off.  Also we have launched it all but we haven’t actually told anyone about it yet – so when the rough edges are sufficiently smooth we’ll start advertising and hopefully drum up some traffic.

After that the good news is that you shouldn’t have to wait all that long until the next game comes along.  It’s already about 75% built!

It is, in fact, built on top of the engine we developed for Bedlam.  Although we've enhanced it a great deal and twisted the mechanics to make it in to something that looks, and plays, very different!

Look out for future blog posts on that subject and everything else we’re up to.  But in the meantime why are you still here? Get over to our website and start playing our games!